Given a curve ${\bf r}(t)$, we would like to be able to measure, at various points, how sharply curved it is. Clearly this is related to how “fast” a tangent vector is changing direction, so a first guess might be that we can measure curvature with $|{\bf r}”(t)|$. A little thought shows that this is flawed; if we think of $t$ as time, for example, we could be tracing out the curve more or less quickly as time passes. The second derivative $|{\bf r}”(t)|$ incorporates this notion of time, so it depends not simply on the geometric properties of the curve but on how quickly we move along the curve. 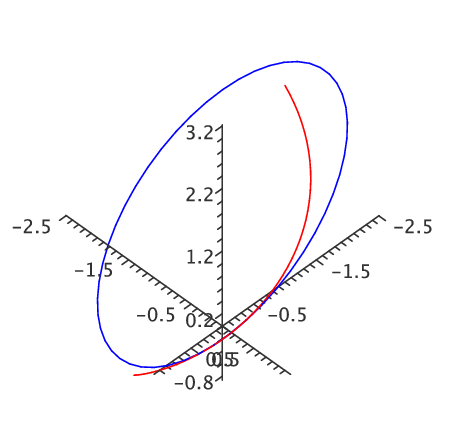 Figure 13.3.1.
A circle with the same curvature as the helix.

The highest curvature occurs where the curve has its highest and lowest points, and indeed in the picture these appear to be the most sharply curved portions of the curve, while the curve is almost a straight line midway between those points. $\square$

Sage can help with the somewhat tedious calculation of curvature.