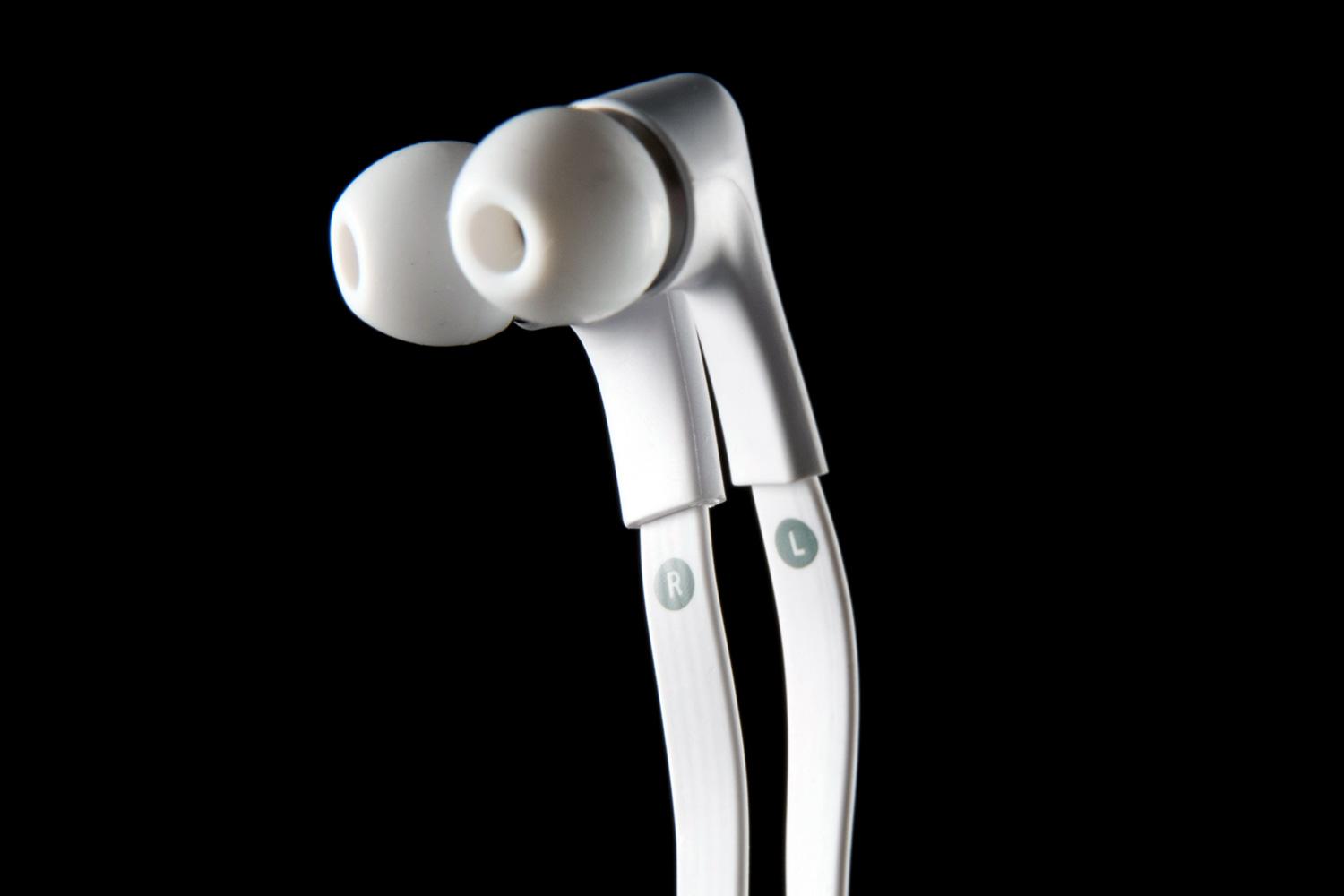 “The a-Jays Five are super stylish and sound great, but achieving a secure fit will be a challenge for many listeners.”

In the eight years Jays has been in business, the Swedish company has managed to develop in-ear headphones across three series, each new model an improvement over the last. But while sound quality has subtly changed through the years, Jays’ unwavering design principles have always resulted in products that consistently put the human that wears them first in mind.

Jays’ latest effort, the a-Jays Five, are perhaps the company’s finest sounding in-ear headphones yet. Plus, they maintain all the user-centric design points we’ve come to love from the company, such as soft silicone finish, in-line control microphones for iOS, Android, and Windows smartphone platforms, and the kind of product packaging befitting Apple’s stringent standards. Add it all up, and at under $100, the a-Jays Five represent a stand-out value in a very crowded product category. There’s just one problem: We’re not sure they’ll actually stay in your ears. And when a secure fit is the most important consideration for an in-ear headphone, this could be a very big problem, indeed.

Out of the box

The a-Jays Five arrive in a simple, shrink-wrapped box with a premium feel, but one that’s far easier to open than its prior boxes, which were cursed by a mysterious and maddening security tab.

Also new for Jays is a cylindrical earphone case — kind of like a can of chewing tobacco, but with something less cancerous inside — which has a couple of insets designed to hold the earbuds in place, with a little pillar to wrap the headphone cable around; not that the a-Jays Five cable would ever tangle on you anyway.

Missing from the package are some accessories Jays has offered in the past, including an airline adapter, and headphone output splitter — not a big deal, since most folks don’t use these anyway. Buyers still get a nice assortment of silicone eartips ranging in sizes from tiny through large.

Perhaps the most remarkable thing about these headphones is that not only are they available for iOS, Android and Windows smartphones, but all three versions come with a three-button microphone. Most Android headphones come with a single button, but the a-Jays Five will let you control volume on all three smartphone platforms, and that’s no small thing.

Jays earphones feel great in your hands when you pick them up – it’s that rubbery silicone stuff we like so much. And, to a degree, that outer skin helps reduce some cable noise as well.

The miniature size of the a-Jays Five’s earpieces is hard to overstate. The bits you grab onto to place the ‘buds in your ears are super small, and when you wear them, the earphones don’t stand out – a discreet in-ear if ever we’ve seen one.

Don’t let the small size fool you, though. The Five have a driver inside that’s large enough to produce some significant bass. We wondered at how Jays did it until we put Five in our ears, and suddenly the deceptively small size became a problem for us.

We’ve tested literally hundreds of in-ear headphones over the past few years, and we’ve learned that our ears are well-suited to the medium-sized eartip used by nearly every one of them. Fortunately for us, the medium-sized eartip is the one most commonly pre-installed on a pair of earphones. That’s great, because 95 percent of the time, we can get to listening straight out of the box.

With the a-Jays Five, the earphones felt too large in our ears when we put them in place, and after they had been there for a while, they felt like they were loosening up and starting to come out. We’d compensate by pushing them in further, but no matter how hard we pushed, they could only go in so far.

If you’ve had trouble getting a good fit with in-ears in the past, the a-Jays Five are not the place to start looking.

We tried using the next larger and smaller eartips, but neither made for a better seal or a more secure fit, and both the sound quality changes and the feel told us we were moving in the wrong direction. The medium eartips were the right choice from the beginning. It’s just that the driver feels too big in our ears.

The problem was compounded by the Five’s tangle-resistant cable. True to its description, it resists tangling. Just try to tangle this thing, we dare you. But it’s also stiff and non-compliant. That means that there’s always some sort of strain exerted on the earbuds. We tried to alleviate some of this by using the included cable clip, but all that did was limit our range of motion.

Not everyone will have this trouble. Some folks with larger ear canals will accommodate these in-ear headphones just fine. But if you’ve had trouble getting a good fit with in-ears in the past, the a-Jays Five are not the place to start looking for an alternative. Instead, we’d recommend checking out the NOCS NS4 Titanium (or one of their other models), a similarly priced set of in-ears with a fit and sound that we love.

The a-Jays Five have a big, meaty sound anchored by unapologetically forceful bass that snatches your attention from the very first note. But big bass is only part of the story here. The Five top that bass with an ample helping of midrange and garnish it all with a sprinkling of scintillating treble that threatens to get hissy at times, but fails to follow through.

Not only can they deliver punchy and deep (bass), but they can maintain clear tonality.

The a-Jays Five did an especially good job rendering Santa Fe & The Fat City Horns’ “Critical Mass” from the band’s latest release,
The Answer. The slow funk tune kicks off with a kick drum pattern that’s all punch and no resonance, and the Five were happy to comply with a quick, tight reproduction that pummeled our eardrums … in a
good
way. A few second later, the band’s electric bass play comes in playing doubles stops (two notes at a time) with the lower octave reaching well into the lowest bass region. Here, the Five showed that not only can they do punchy and deep, but they can maintain clear tonality, even on demanding tracks. Mud was never a problem.

We’ve heard the Five’s midrange response described by others as lean, recessed, and even muffled, but from our experience, it is none of those things. Yes, the bass is big, but it never obscured the midrange. Vocals were clear, with sufficient body, and midrange-intensive instruments like tenor saxophone and piano always shined in the spotlight. Marc Broussard’s rendition of the soul classic, “Love and Happiness,” showed just how even-handed the a-Jays Five can be with a male vocal, maintaining diction and accurate sibilance for outstanding lyric clarity.

We also appreciated how well the upper midrange transitioned to the treble, which made breathy vocal performances like that of Diana Krall’s a real treat to listen to. Also, the complex overtones that upper brass instruments make had plenty of grit and zip, which makes for a much more convincing performance of brass-heavy recording. Just our style!

Of course, the moment the a-Jays Five began to slip out of our ears — which was often enough to become a serious hindrance to this review – everything they did well went away. We can’t stress enough how important a secure fit is for getting the proper sound from an in-ear headphone. Unfortunately the Five didn’t work well for us in this regard. Talk about a buzz kill.

The Jays a-Jays Five are the sort of headphone that bring the party to whatever music you might be listening to. Anyone looking for an in-ear with big, yet tasteful, bass at under $100 would do well to put them on their shortlist.

However, we must caution potential buyers that the a-Jays Five have a finicky fit. Nearly every pair of headphones that passes through Digital Trends fits us, but the Five simply wouldn’t. We think it’s worth ordering them up from Amazon for a trial – if they don’t work out, they can always be returned. However, if you’re not interested in a taste test, consider the similarly priced NOCS NS400 Titanium or the Klipsch R6i; both offer similar bass response and are extremely comfortable.